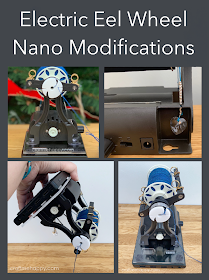 was damaging my hip joint and an electric spinning wheel was previously way out of my price range.

My most favourite of the Electric Eel Wheels is the Nano.  I love it for its portability, low volume, and general overall cuteness.  It was also the most affordable.  There's something about its size that makes it virtually as portable as a drop spindle, but as fun as a toy.  Most of the time it sits on my conservatory windowsill next to me, but it also joins me in the kitchen to fill time while I'm cooking, It’s quiet enough to use while I’m watching TV with my family and it's small enough to go into a handbag and use while I'm waiting in the car. 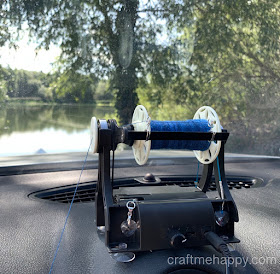 It's the only e-spinner I know that is small enough to sit on my car dashboard - while stationary of course!

There's something about spending less than £100 on a spinning wheel that makes me feel like I have greater permission to modify it and customise it to suit my needs.  I wouldn't dream of modifying a solid wood, top of the range E-spinner, but I've happily made several modifications to all of my Electric Eel Wheels to make them my own. 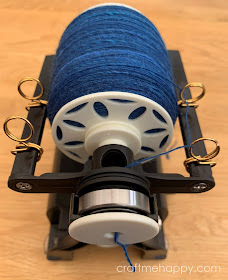 A whole maker community has built up around the Electric Eel Wheel, fuelled mostly by the inventor, Maurice Ribble.   Maurice has an unusually open approach to inventing and product design - often sharing new product ideas with the Ravelry community to gain feedback, well before going to manufacture. Maurice also generously shares files so that people can 3D print their own accessories for the Electric Eel Wheel product range, as well as allowing people to sell these 3D printed Electric Eel Wheel extras for their own profit. Not many business owners or inventors would be quite so open or altruistic.

If you look on Thingiverse  you will find many, many accessories you can print for the Nano  - uploaded by various Nano owners that want to help other spinners by sharing the accessories they’ve created to personalise their own spinning experience.

One universal problem spinners frequently come across is how to secure the twisted singles when you are taking a break from spinning.  Some use a Velcro dot while others use a clip or twist keeper. 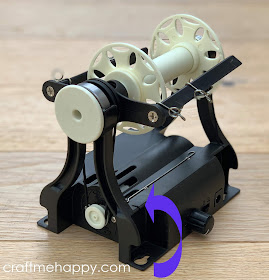 There is a small cut out on the Electric Eel Wheel Nano that is intended to hold the twist in singles, but I generally spin much finer than this will hold.  Other people secure the yarn under the magnetised orifice hook, but again, this is slightly fiddly and there is a definite chance of it coming away when you’re transporting it.  Personally, I would just let the singles twist up on themselves, but occasionally I found I was having to break off a section of singles as the fibres would become knotted onto themselves. 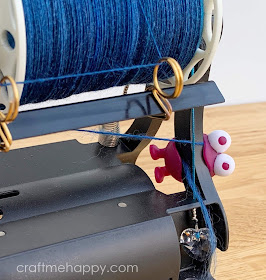 Quite a few spinners use these cute wine glass charm clips. I did buy some and tried it for a while, but I found it a bit too fiddly and so I reverted back to my old system of just letting it twist up on itself.  I needed something quick and simple to suit relatively thick, to very fine yarns that would be semi-permanently attached to the e-spinner.

It occurred to me that, as I like to spin fine on the Nano, I keep the orifice reducer in permanent position and so maybe I could make it function as a yarn keeper as well.  Helpfully, Maurice Ribble has provided the 3D printed stl file for the original Nano orifice reducer. 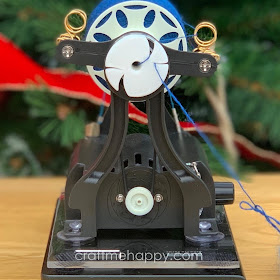 With the help of my husband, who knows how to drive a 3D printer, and my introductory knowledge of Tinkercad, I was able to redesign the original Nano orifice reducer to become a multi-purpose orifice reducer and twist keeper.

I made a little animated gif to show it in use.  You can use it as a twist keeper when you're taking a short break; or if you're moving your Nano around, you can wrap more of your spun singles around it to prevent them from knotting onto themselves in transit.

If you'd like to 3D print your own Nano Twist keeper, the file can be found on Thingiverse here.

One of the first modifications I made to my Electric Eel Wheels 4 and 5 was to change the sliding hook system to a metal split ring system.  I just prefer a system that can be moved with one hand and I found the original hooks on all three Electric Eel Wheels to be a little stiff for me. 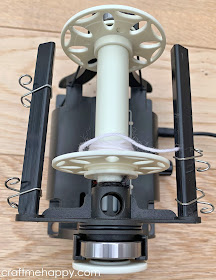 The original hooks on the Nano are made from steel and I found them quite awkward to use.  They were tricky to move with one hand and my yarn kept getting caught or wrapped around the ends of the hooks. 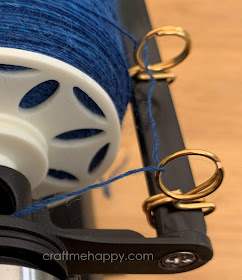 These final sliding split rings are made from gold plated, 1.2mm copper jewellery wire, but I made a video showing how to make your own here using slightly thinner wire.  If you do make your own, you should note that I found that there was a definite correlation between how flexible the wire is and how easy they are to move, and finding a compromise is key.  I tried a much heavier gauge aluminium wire at one point (which was much softer than my 1.2mm copper); the aluminium moved more smoothly than all of the other wires I chose, but the wire had very little memory compared to copper or steel and so bent out of shape much too easily.

There was a little confusion as to how they worked on the Electric Eel Wheel Ravelry forum, so I made a second video to demonstrate them here -

Gluing on the Pulley Wheel

One fix I believe everyone should do to the first iteration of the Electric Eel Wheel Nano is to glue on the pulley wheel, or at least sandwich a piece of thread between the pulley and the motor rod.  Most people find that there is some slippage of the pulley on the rod - especially after they've been spinning for a while.  The slippage tends to result in a very hot motor and slows down the wheel significantly.  I used 2 part 5 minute epoxy glue. 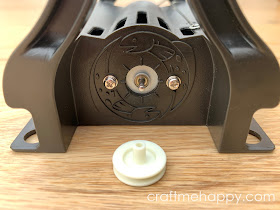 I purposely sought out methods of making my Nano as quiet as possible and I made a little video to show how I modified it to go from 68 decibels to 45 decibels.


Out of the box, the Electric Eel Wheel Nano sound levels measured 68dB, which is about the same volume as my Electric Eel Wheel 5.  It's not an annoying level, but if I wanted to watch television I would certainly need to turn the volume up, which I'm sure would slightly irritate anyone else in the room.

After my sound-reducing modifications, the Nano measured 45 decibels, which is approximately 4 times quieter than 68dB and can hardly be heard over general household noise.

The Electric Eel Wheel Nano comes with a very simple covered stretchy elastic band braking system.  It's very basic and its simplicity helps to keep down the price of the Nano.  I decided to change my stretchy cord for a system that would give me more control over how much brake tension is added to the bobbin. 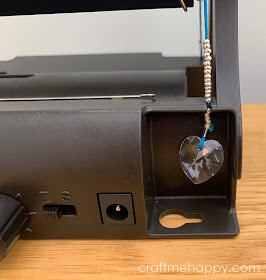 as a brake band and used 2mm crimp beads to set the increments as they were the smallest beads I could find with big enough holes. 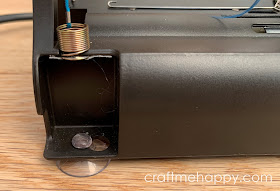 I used an Ashford brake band spring, with the loop cut off, on the other end of the brake band and just attached it discretely to the Nano with a small rectangle of black duct tape.

I love this brake system as it seems to require significantly fewer adjustments than the original stretchy band.   Additionally, as the beads create definite increments, it's easy to set your tension back to exactly the right place when you start a new bobbin, as opposed to a stretchy band or twisting knob system that requires a lot more trial and error.

Anecdotally, I also noticed that my motor didn't heat up nearly so quickly with the Chinese knotting cord - possibly because it is much smoother than the original stretchy brake band and so there is less friction.  But I'm not an engineer...

Attaching the Nano to my Battery

.  This is one of the batteries suggested and recommended by Maurice Rib

ble - primarily because unlike most power bricks, it doesn't turn itself off when it detects that it's not being used.  There is also a battery case that you can 3D print to house this particular Talentcell battery.  The added benefit of attaching the Nano to a battery case is that it adds weight to the very light Nano and reduces the probability of pulling it towards yourself.  It's also a very compact battery and so combining the e-spinner and the battery opens up the portability of the Nano.

Unfortunately, in the UK, the TalentCell batteries are much more expensive than in the US.  Aside from the price, I already had an Anker battery that I'd bought to use with my Electric Eel 4 that was the perfect size to sit my Electric Eel Wheel Nano on.  (Unfortunately this battery is no longer made.)  I'd added suction cups to the base of my Nano to reduce vibration and increase the airflow underneath the motor, but I found that the suction cups would only stick to the very shiniest of surfaces. 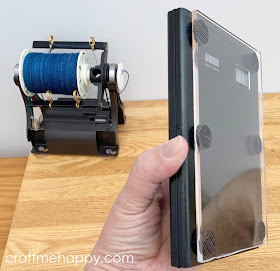 To get the suction cups on the Nano to stick firmly to the battery, I attached a piece of Perspex to the top of the battery with some black Velcro dots... 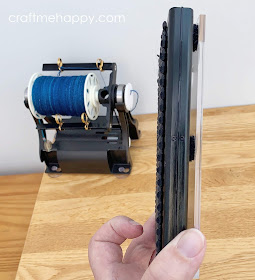 ... and then used double-sided sticky tape to attach some non-slip matting

to the underside of the battery to further reduce the probability of pulling the Nano towards me while spinning. 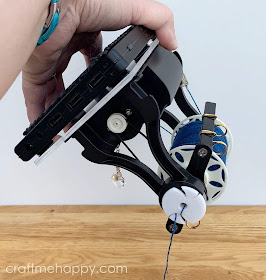 It works really well and with the battery attached it's now even more portable.

I do hope talking through my Nano modifications has been helpful.  To reiterate, the Electric Eel Wheel Nano was intentionally designed to be mass-produced to make it affordable, both to people interested in taking up spinning as a hobby and to people like myself that are experienced spinners but wanted a second (or 5th!) wheel for traveling with.

The Nano was designed to be as small and light as possible, without losing focus on usability.  The design is elegant but simply finished, allowing spinners to make their own modifications and alterations - or to spin with it straight out of the box if they prefer. There is an extremely useful post on the Ravelry forum that documents many of the other modifications that Nano owners have made to their wheels to personalise their own spinning experience.

This blog post contains Amazon affiliate links to similar products that I purchased myself to alter my Electric Eel Wheel Nano. If you click through and purchase anything, I may receive a very small percentage of the purchase price.


Related Post - The Evolution of the Electric Eel Wheel